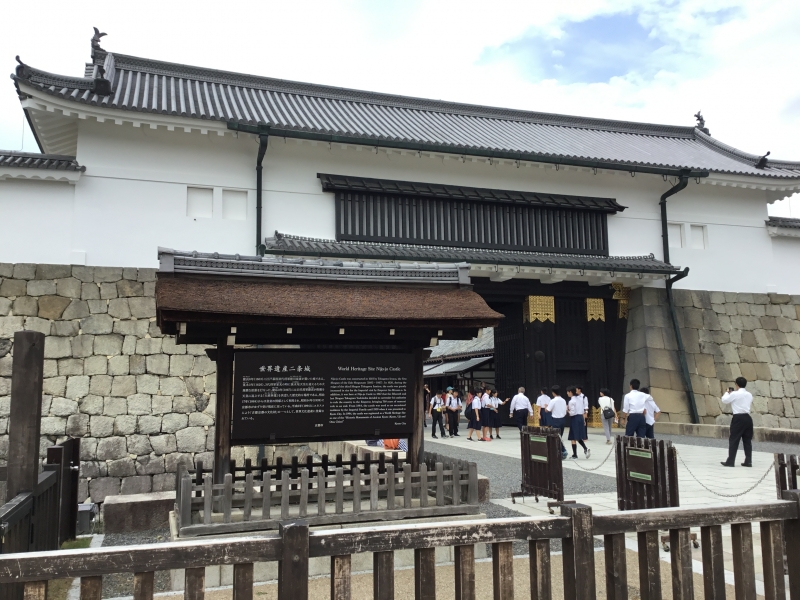 East Gate of Nijo Castle: The main gate to the Castle. It is thought to date back to 1662. Originally, the gate was a two story gate much like the current one. The gate was altered for the visit of the Emperor to a one-story gate, so that no-one would be able to look down upon the the Emperor from above. Visitors get the entrance ticket on the right side of this gate. 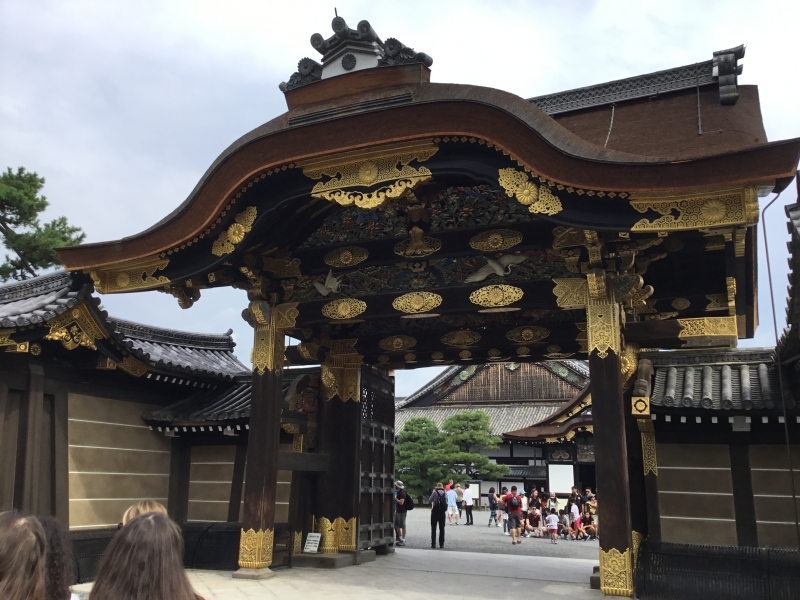 Kara-mon Gate: Standing at the entrance to the Ninomaru-goten Palace. The roof is used in cypress bark. The gate has four supporting pillars, and has magnificent and brilliantly colored carvings of cranes,pin,bamboo,and plum blossoms,symbolizing longevity. The carved lions protect the Palace. A 2013 restoration returned the gate to its former glory. 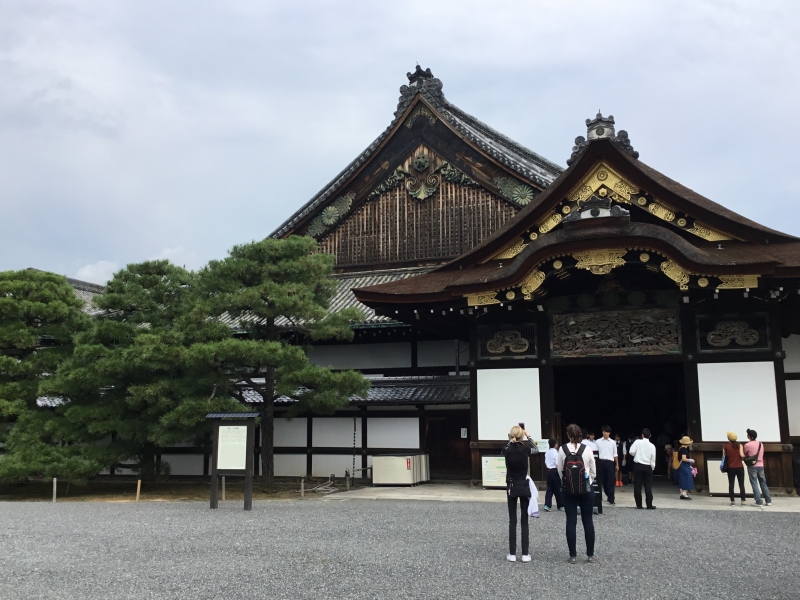 Ninomaru-goten palace: The Palace consists of six connected buildings arranged in a diagonal line from the southeast to the northwest. The Palace has 33 rooms and over 800 tatami mats, and is decorated with paintings by the Kano School(replicas). Subjects include the Matsutaka-zu(pine and hawk), tigers, and leopards, all of which stress the authority of the Shogun, as well as cherry blossoms and other flowers representing the four seasons. Left side of this building, the entrance to the Ninomaru garden is located. 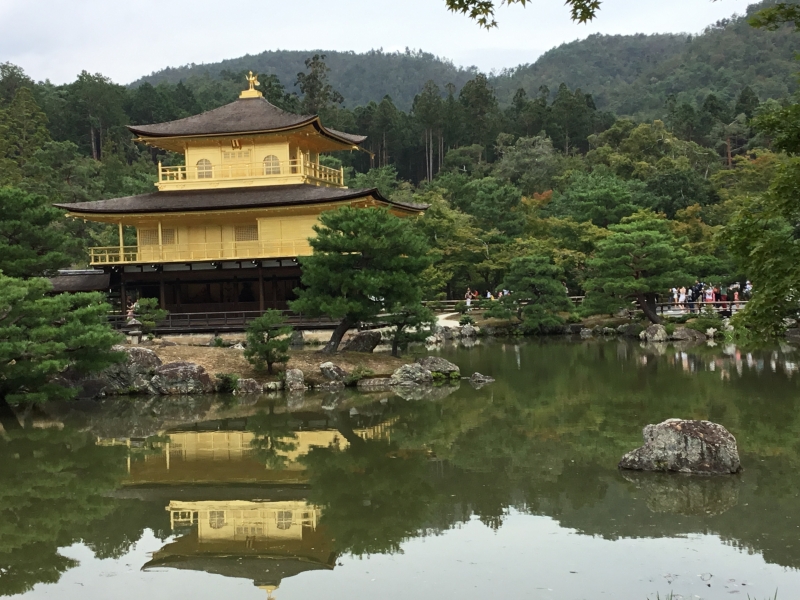 Kinkkuji (Golden Pavilion) Temple: Kinkaku is a Buddhist hall containing relics of Buddha. Ashikaga Yoshimitsu, the 3rd shogun of the Muromachi period(14th -16th centuries), took a liking to the area and acquired in 1397. He then built his own villa. The pond with the Golden pavilion, and islets large and small, is the center of the garden. As a pond garden designed for strolling it is typical of the Muromachi period. 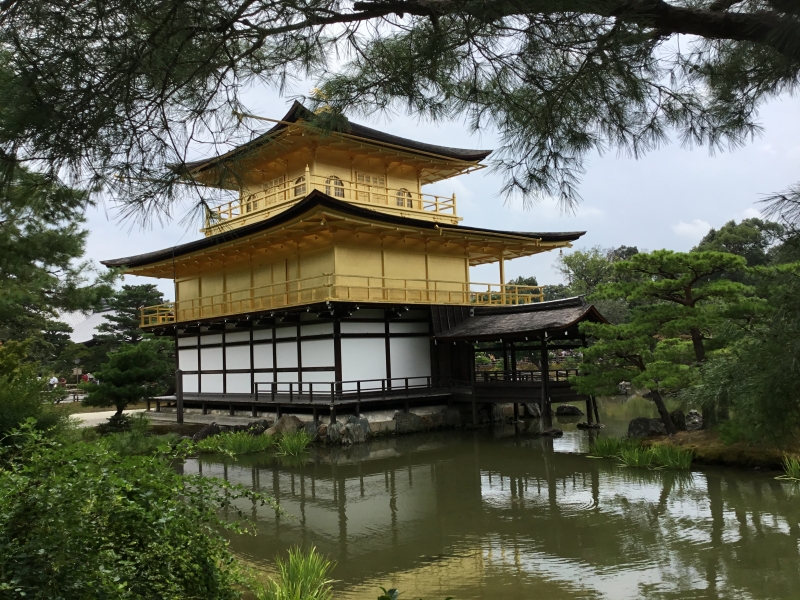 Gold foil on lacquer cover the uppers in two levels of Kinkaku, and a shining phoenix stands of top of the shingled roof. The first level is built in the shinden style of the 11th-century imperial aristocracy; the second level is in Buke style of the warrior aristocracy; and the top level is in the Chinese zenshu-butsuden style. Overall, Kinkaku is representative of Muromachi-period (14th- 16th centuries) architecture. 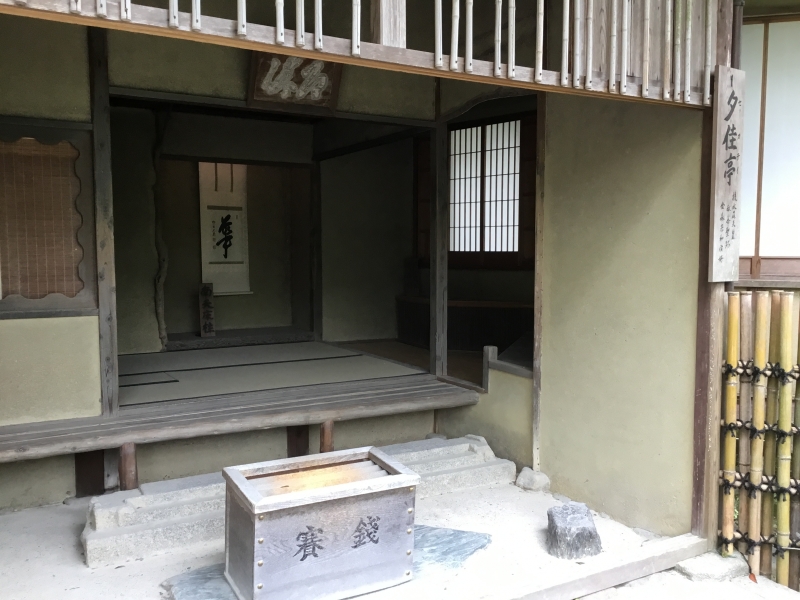 The Sekka-tei Tea House: The detached tea house was built during the Edo period. Kinkaku is especially beautiful when seen from here in the late afternoon sun. This view is reflected in the tea house name,Sekkatei(Place of Evening Beauty). The famous alcove pillar is of nandina wood(heavenly bamboo). The Rock Garden in Ryoanji Temple: This simple and remarkable garden measures only 25 meters from east to west and 10 meters from south to north. No trees are to be seen ; only 15 rocks and white gravel are used in the garden. This internationally famous rock garden was said to be created at the end of Muromachi Period(around 1500), y a highly respected Zen monk, Tokuho Zenketsu. 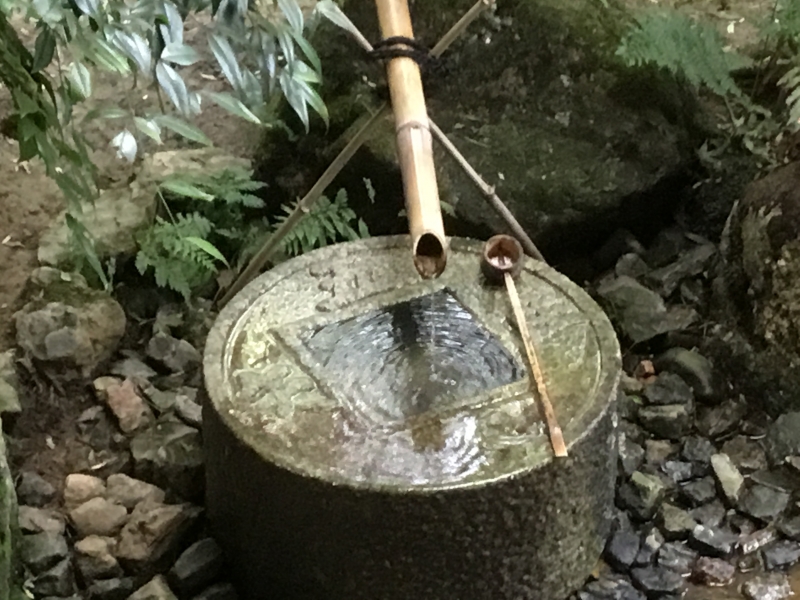 Each place has its own shuin stamps and hand drawn calligraphy as it shown , the rock garden , the inscription of Tsukubai, the seal of temples etc. The fee of JPY300 is required for this Shuin . 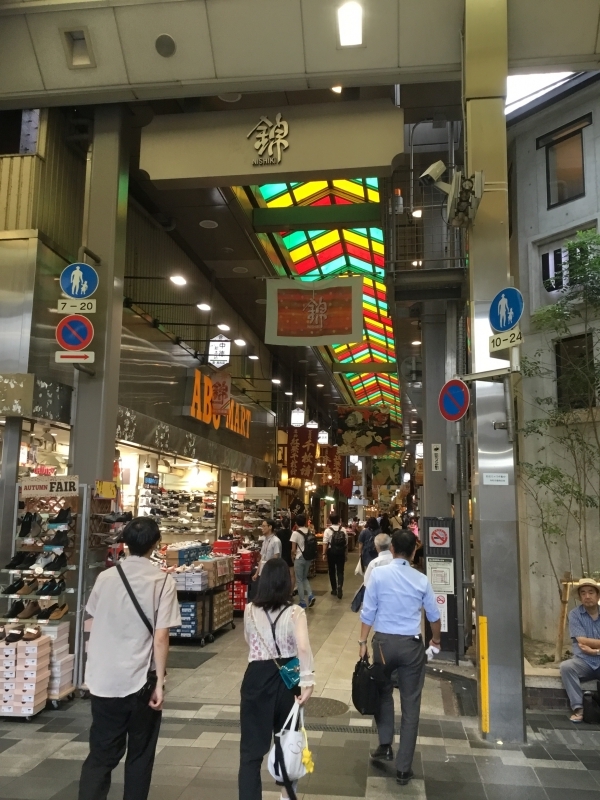 Nishiki Market: It is Kyoto’s largest traditional food market which is is a narrow, five block long shopping arcade lined by more than one hundred shops and restaurants. Some shops sell takeaway food like skewers of yakitori or sashimi, and a few sit down restaurants can be found 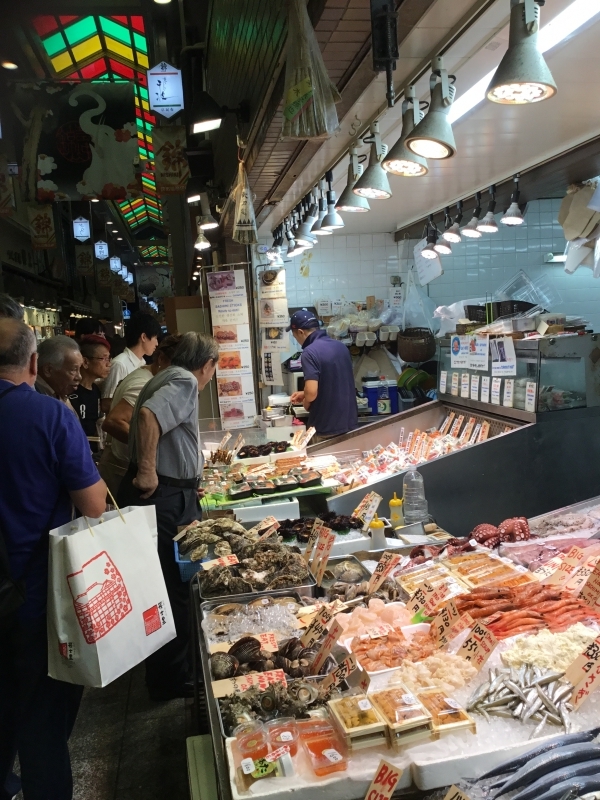 You’ll find all the major ingredients of traditional Kyoto cuisine on display here: tsukemono (Japanese pickles), fresh tofu, Kyo-yasai (Kyoto vegetables), wagashi (Japanese sweets), tea, and fresh fish and shellfish. There are some shops where you can taste foods and drink with a small cup. 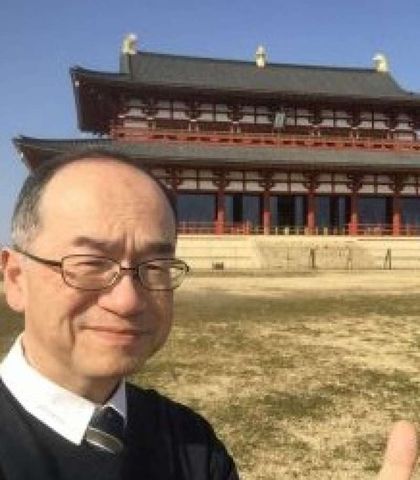 Kyoto was the capital of Japan and home of the Imperial Court for more over 1,000 years,AD794 - AD1868. Countless temples, shrines and other historically structures including 17 world heritage sites survive in the city today.

Feel free to personalize this offer with Takatoshi.

Want to personalize this tour? 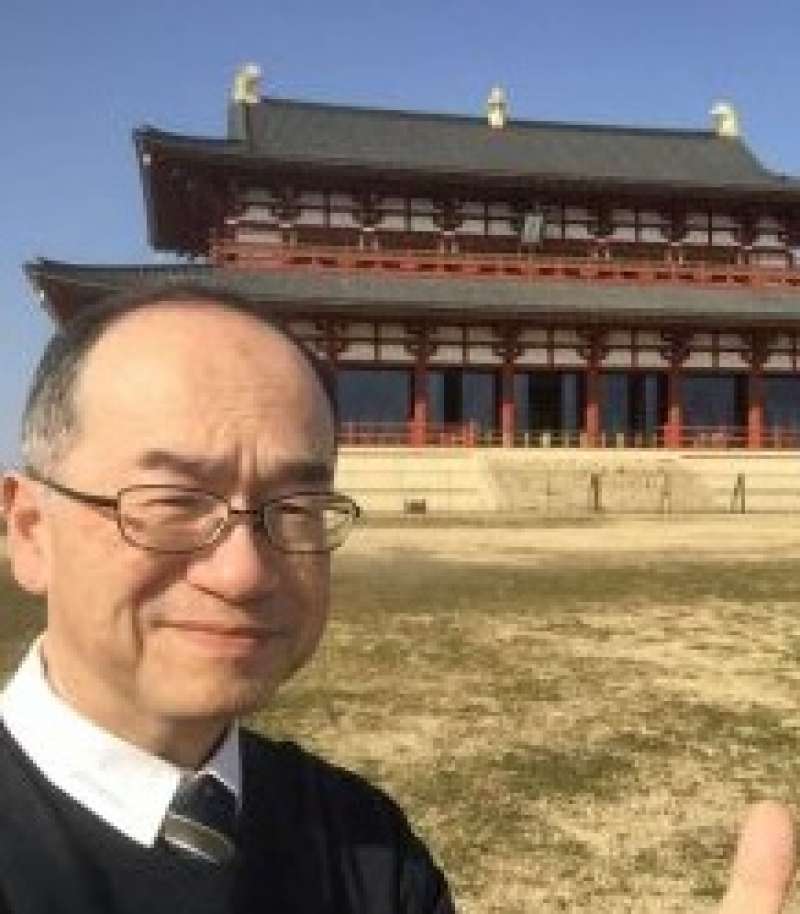 Customize & Get a Quote

7days are requested prior to the date of guiding.
Overtime fee: 3,000JPY/Hour

Japanese garden are two distinct types : A pond gardens designed for strolling which are historically, attached to the estates of aristocrats or feudal lord, and a dry landscape gardens(also known as a rock garden) are typically associated with Zen Buddhism, thus some famous Zen temple have this type of garden.
The 1,000years of Kyoto has several different periods like Heian, Kamakura, Muromachi, Edo. The ruler has changed many times during these period but the Tenno (Emperor) of the Japanese imperial line has been succeeded by the male bloodline since the first Emperor Jinmu to the hundered and twenty-fifth present Emperor (so-called `unbroken line of Emperors,' read more

Can I make changes after I book?

Yes! If you need to make changes such as removing or adding someone to your booking or changing the date or time of your tour, contact us by phone or email

Starting and ending points of the tour.

After you secure your booking, the starting and ending points of your tour can be customized to your convenience (ex.: your hotel, nearby stations, etc.). Don't worry, we will take care of you! Some tours may have an extra fee for this service, make sure to check the tour page.

What happens after I book a tour?

After booking a tour, the guide will accept (or decline) your booking within 24 hours. Then you will be noticed by email from Triplelights.

Is the price per person or per group?

The price is charged per group. Which means that you make a one-time payment for your entire group and the price will not change if it is less or more people.

Can I add more people to my booking?

Some guides accept extra people (more than the specified number) for an extra charge. Please check for the extras on the tour or booking page, or contact your guide directly to clarify.

Will there be other tourists in my tour?

No. Your tour is private, only for you and your family or friends, there will be no other group of tourists together in your tour.

Can the guide pickup me at the airport?

Yes, but there will be additional charge for that and it is not by car. The guide will go pick you up using public transportations. For further details, please contact your guide directly.

I'm travelling alone. Can I book this tour?

Yes, you can and you may be able to get a discount if you are traveling alone. Price depends on which guide you choose.

Takatoshi made our trip very memorable! He was kind, patient and knowledgeable. His itinerary was great and we ended the tour trying Japanese tapas style dishes pairing with Sake. I highly recommend him! Thank you very much Takatoshi! :-)

Thank you very much for your kind review. I have also enjoyed the tour with both of you visiting places and having sake at that time. As mentioned, Nara has several cities and places to where you have to visit like Asuka etc. as for the foundation area of Japan. You are always welcome and looking forward to visiting again in Nara.

Takatoshi is a wonderful guide! He is knowledgeable, thoughtful, and so ready to share his love for his country and culture. We spent the day touring many sites in Kyoto and learned so much. We toured beautiful gardens and mastered the subway system. He’s totally fluent in English and our day was an enjoyable learning experience. We highly recommend him!

Dear Debra san, Thank you for your nice comment to my tour yesterday. I really appreciate it and have also enjoyed tour time with your member. Hopefully, we will see you again anywhere in this small world. I wish your safely back to your home as well as your and your family's good health and prosperity in future.

“ Very great guide for discovering a bit of Japan ”

We spent one day of visit in Kyoto with Takatoshi. He knows a lot about history and the different tips along the road. We had a great English discussion about any topics. We do recommend Takatoshi who also walked with us to a really nice Sake local place. Hope to see you again in Japan

Thank you for your positive review to my tour in Kyoto. It was also nice time for me during the tour. I convince that you have spent great days in Japan , how was in Fukuoka ? Hope you had a nice time at Yakitori restaurant . I wish you and your family's prosperity in future and see you again anyplace in this small globe.

This was such a great day in Nara. Takatoshi took us all over, showing us the highlights and adding a lot of history and depth at each location. He was able to answer every question we had about the different places with great detail which I really liked. He also knows the city since he lives in the area and was able to take us to cool places that I would never have even known existed. His English proficiency is also one of the best we had in Japan which makes a huge difference. If you are thinking of doing a half day/day in Nara, hire Takatoshi. Seriously, you will not regret it.

Thank you for your positive and kind comment to my Nara tour. I really appreciate having a time with you and your wife on that day, though the temperature was more than 32 degree and high humid . If we could have more time, I would be glad to show you other places, but I will expect your next opportunity among any city in the west Japan. I wish your nice further journey in Japan and your safely back to your home. I have already sent pictures taken by me to you address. Hope you have well received it.

Takatoshi san, the licensed Guide at Nara took us around Nara. His experience and knowledge about this ancient capital of Japan elevates our understanding of this land that was the center of administration during the Asuka period. The Land of the Rising Sun unfolds several wonders at once. The Deer Park, famous Todaiji Temple dedicated to Lord Buddha, Shinto shrines that primarily believe in nature worship and rugged stone lanterns radiate history, faith and Takatoshi san gently shared with us the story about when and how the shrines were built. The strength of architecture of the past can be seen even though renovation through centuries has kept the structures stand as they do today. Takatoshi san enlightened us on the difference between Shintoism and Buddhism, how devotees bow and pray ... read more

Dear Chrtan san,Thank you for your nice review to my tour in Nara. I had also spent a nice time with you and your family on that day. I hope you could have a beautiful journey this visit to Japan. I wish you come to again even more ancient time place of Asuka area where is foundation place of Japan. As I told you , we have a close relation ship with India in terms of religious and culture things. Hopefully, we look forward seeing you again in near future. You or your family are expected to come here . Thank you again for your choosing my tour and sharing your time with me !