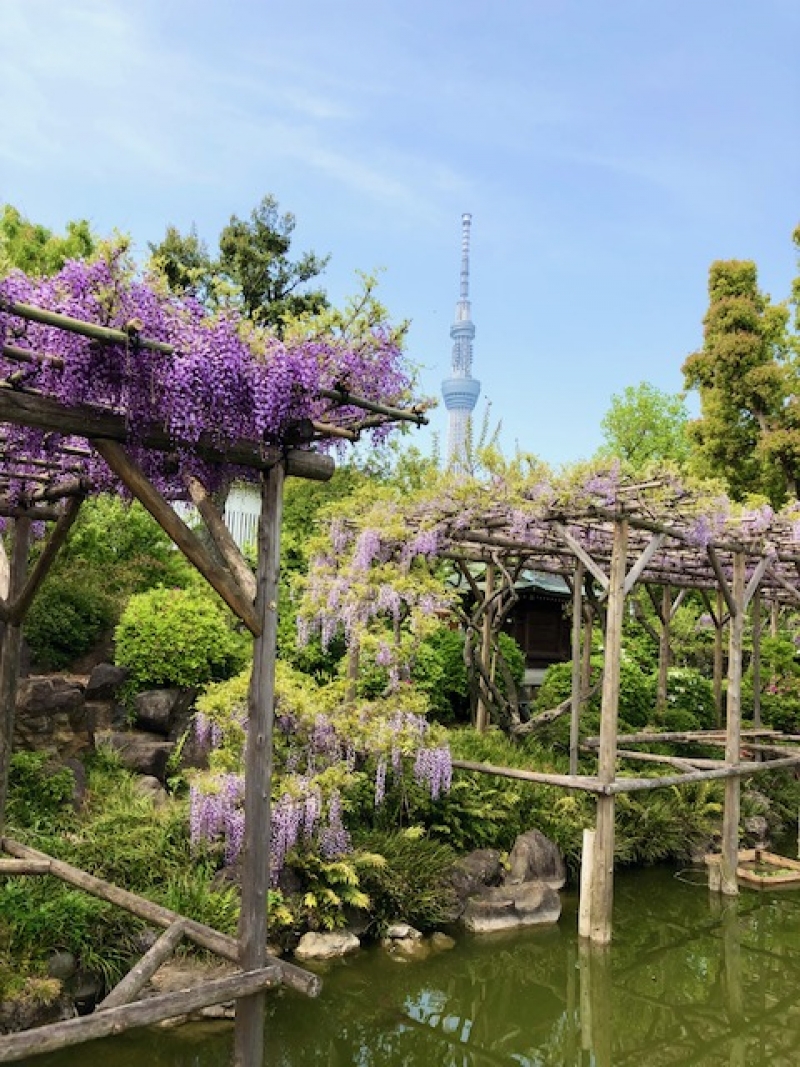 Can you guess what this place is? The combination of wisteria flowers and Tokyo Skytree is so beautiful, isn’t it? There are usually many people there during Wistera Festival at this time of year. I’ve often guided people there to show beautiful flowers and Japanese culture.  But as you know, we’ve had to refrain from outing under a state of emergency since last month due to COVID-19. I guess this place also has few people now. This is a picture I took last year. This is a shrine famous as a place for students to pray at when seeking examination success along with elaborately landscaped grounds, plum trees, and, a profusion of wisteria like this. 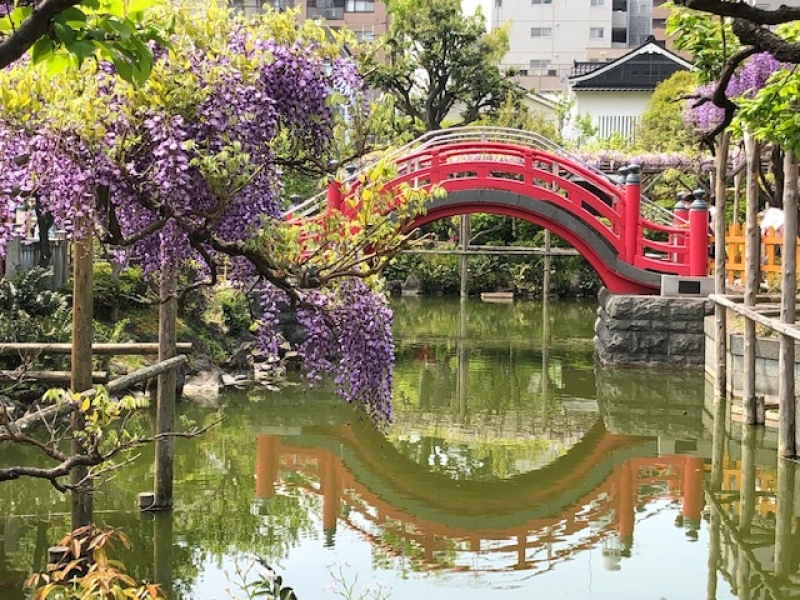 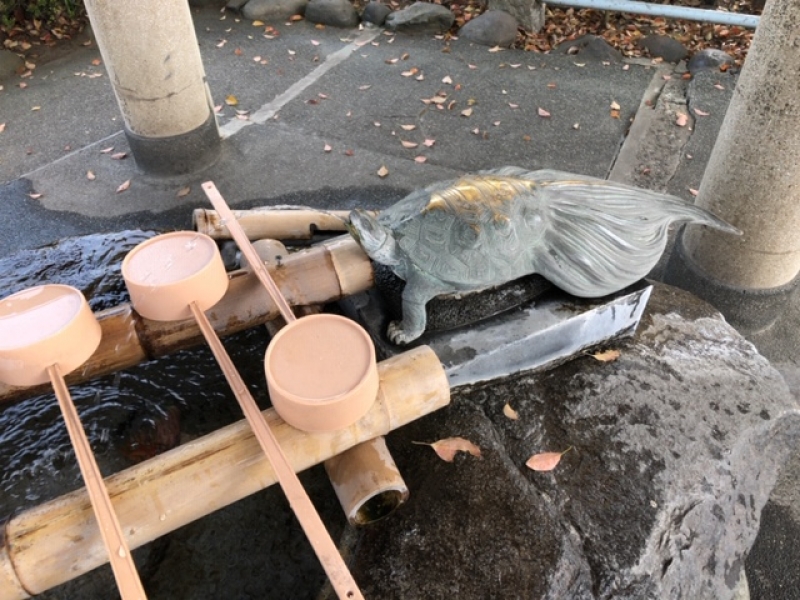 Chozuya: A place for ritual cleansing of hands and mouth with water before visiting shrines to make a prayer.

What's uniique about this chozuya is the turtle. The bronze tortoise issues a stream of cleansing water. That's because of the name of this shrine. The "kame" in Kameido means "turtle" or "tortoise", and the pond here is well-known for is large tortoise population - and also has koi, or carp. I've often noticed that those turtles are not indigenous species of Japan, though. Those who gave up keeping their pet turtles seem to have brought them to this pond secretly. Anyway, they have, however, become a symbol of the shrine, as turtles/ tortoises are said to live up to 10,000 years in Japan. 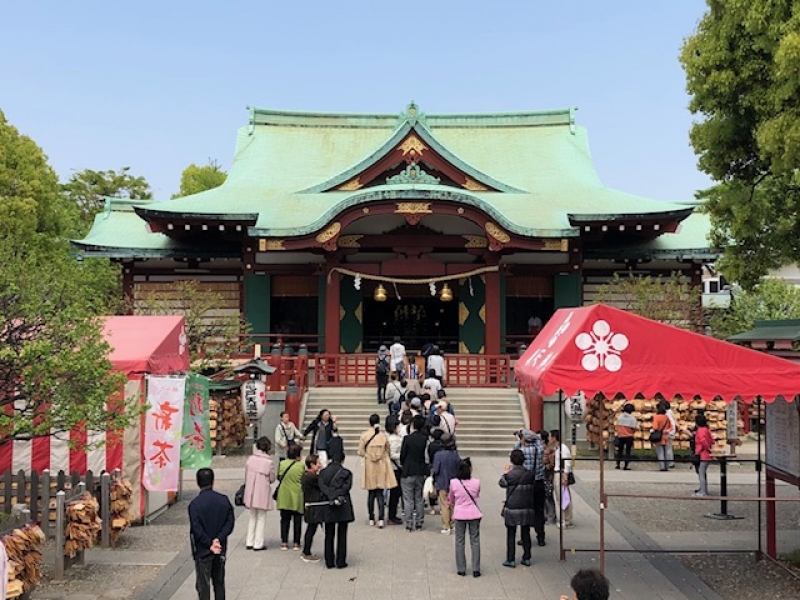 Kameido Tenjin Shrine is dedicated to Sugawara no Miichizane, who was the exceptional scholar, poet, and politician in Heian period. After Michizane lost his position as Udaijin (minister of the right) due to his political rival’s plot, he was sent to a place far away from the capital and passed away in despair. There were several catastrophes on end after his death. People said that all the bad luck had been caused by Michizane’s curse, so in 923 the Emperor tried to console Michizane’s soul by decimating the imperial rescript on him being relegated to a lower position, returning him to the Udaijin and conferring the posthumous honor. The well-known Dazaifu Tenmangu Shrine in Fukuoka, Kyushu, where Michizane had lived his declining years was founded first. Then the head shrine of Tenjin Shrine was founded in Kyoto, then capital of Japan. That’s the famous Kitano Tenmangu Shrine, which was built in 947, 44 years after Michizane’s death. Kameido Tenjin Shrine was first built here in 1646. Its founding was the result of "missionary" work by a descendant of Sugawara no Michizane in the mid-17th century. He was a priest of Dazaifu Tenmangu Shrine. Kameido Tenjin Shrine was destroyed in WW2 and rebuilt in stages from 1947, achieving full restoration in 1979. 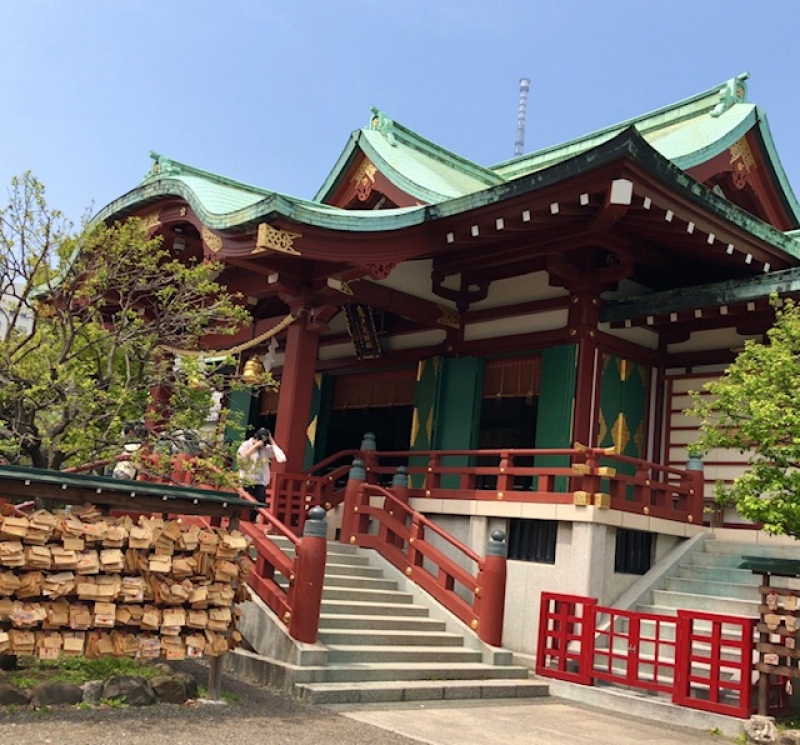 As Michizane was a great scholar and poet, he is believed as a patron deity of students. Students and their parents have come pray for academic success here at Kameido Tenjin Shrine for centuries. Those wooden tablets are called Ema, on which people write their wish.  ‘May I pass the entrance exam of Tokyo University!’ for example. Last year, I bought a talisman here at Kameido Tenjin Shrine for my nephew who were to take an entrance exam this year. He succeeded passing the entrance exam of Tokyo University in March.  I'd say this shrine would be very responsive to people's wishes. He has yet to go to the university thanks to the corona virus pandemic, though. Fortunately, I went back to the shrine to show gratitude before a state of emergency was declared. It's important not to forget the mind of gratitude.

Even if you don't have to pray for study, it's worth visiting here.  As this shrine has a nick name of 'Flower Shrine', you can enjoy several different kinds of flowers throughout the year. If you are lucky enough, you'll encounter a traditional wedding ceremony or other rituals held in the main hall of the shrine.

Why not come to Kameido Tenjin Shrine to enjoy beautiful flowers and learn Japanese culture when things get back to the normal?

I'm looking forward to guiding you! Thank you for visiting the blog. 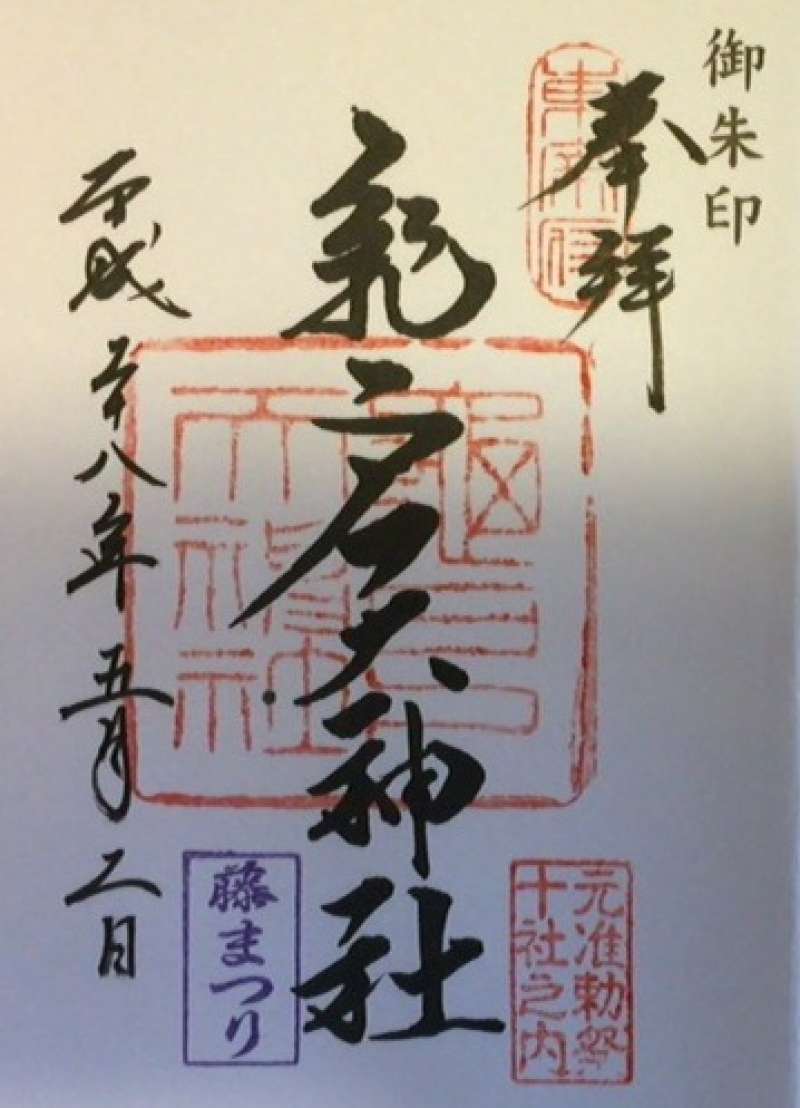 by MAYUMI
“The Chokusai-sha shrine” is a shrine where festivals are attended by imperial messengers sent by the Emperor. In 1870, twelve shrines in To... 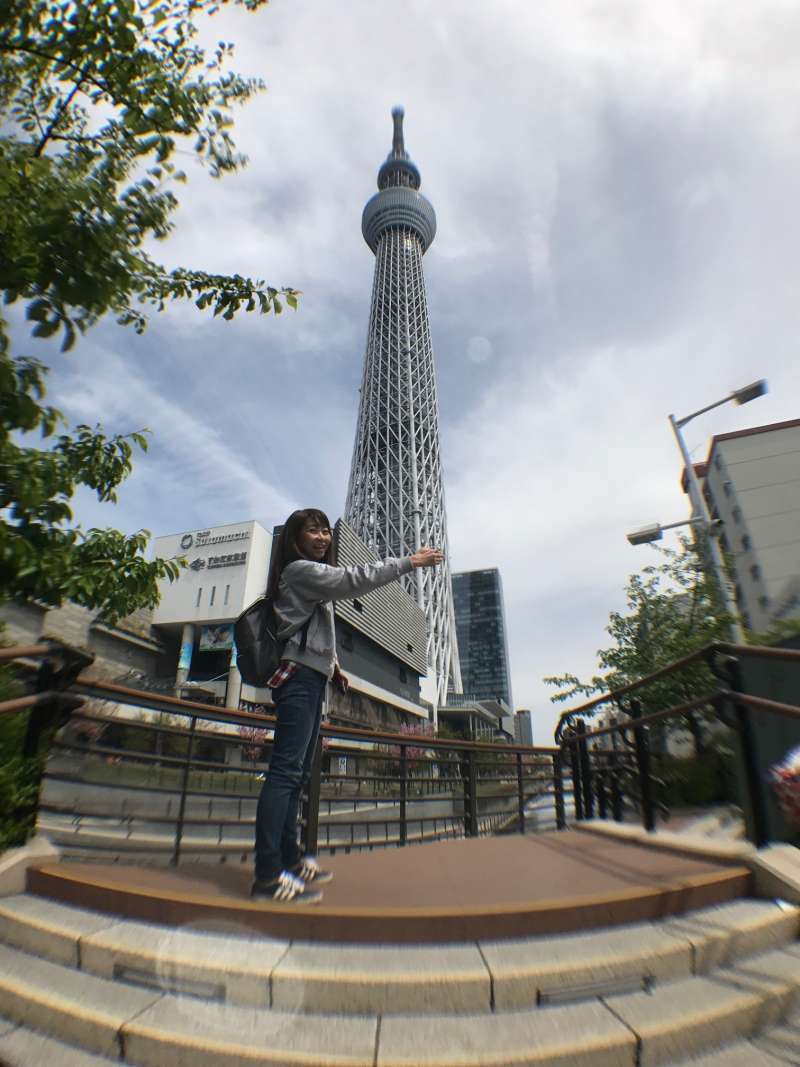 by MAYUMI
It’s so refreshing to leisurely walk around the city at this time of the year. I’ll show you one of my favorite routs. Tokyo Skytree is now ... 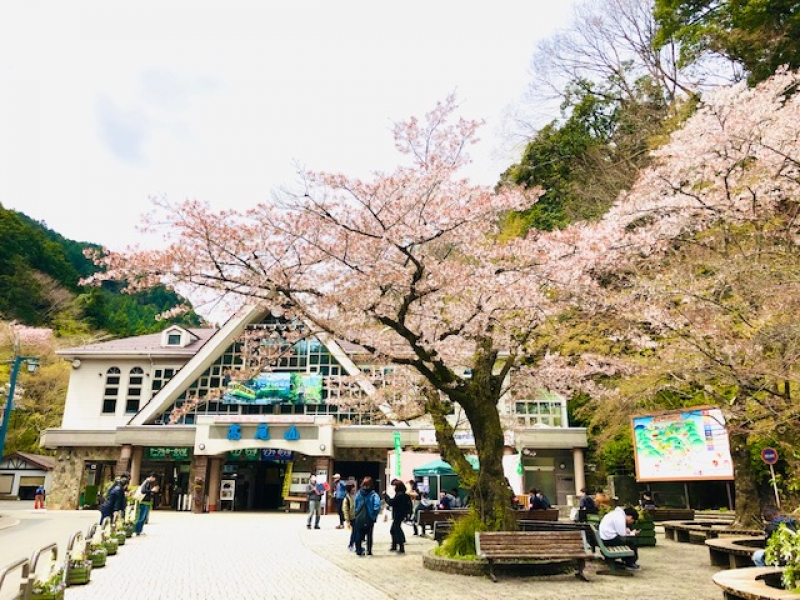 by MAYUMI
I just want to share my beautiful tour with my future guests. Last year, I was asked by my guests to take them somewhere to see cherry blos... 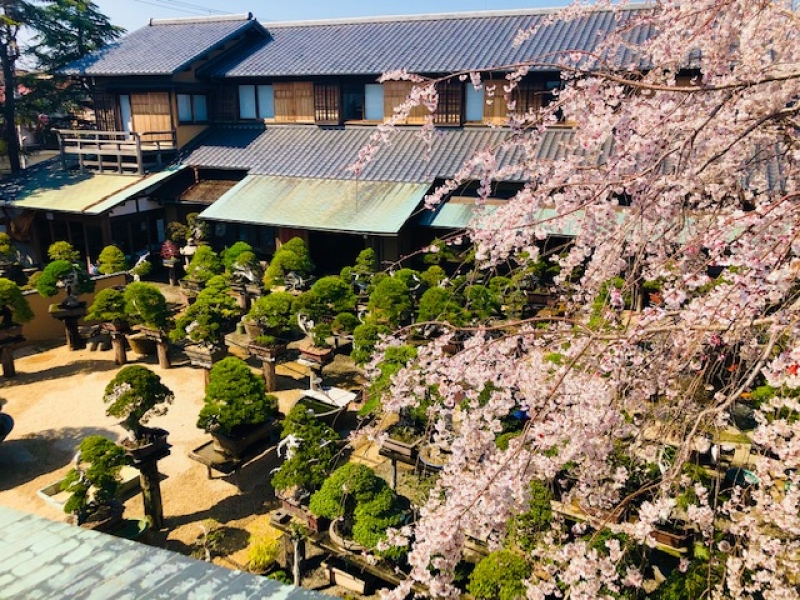 by MAYUMI
As anyone in the world knows, we are being called on to avoid outing due to the COVID 19. Just before the request, I made it to a bonsai mus... Explore the world of Ramen-Jiro, ramen I eat most frequently

by MAYUMI
A ramen enthusiast would know about Ramen-Jiro, which is famous for its huge portion and strong character. When I finish eating the huge por... 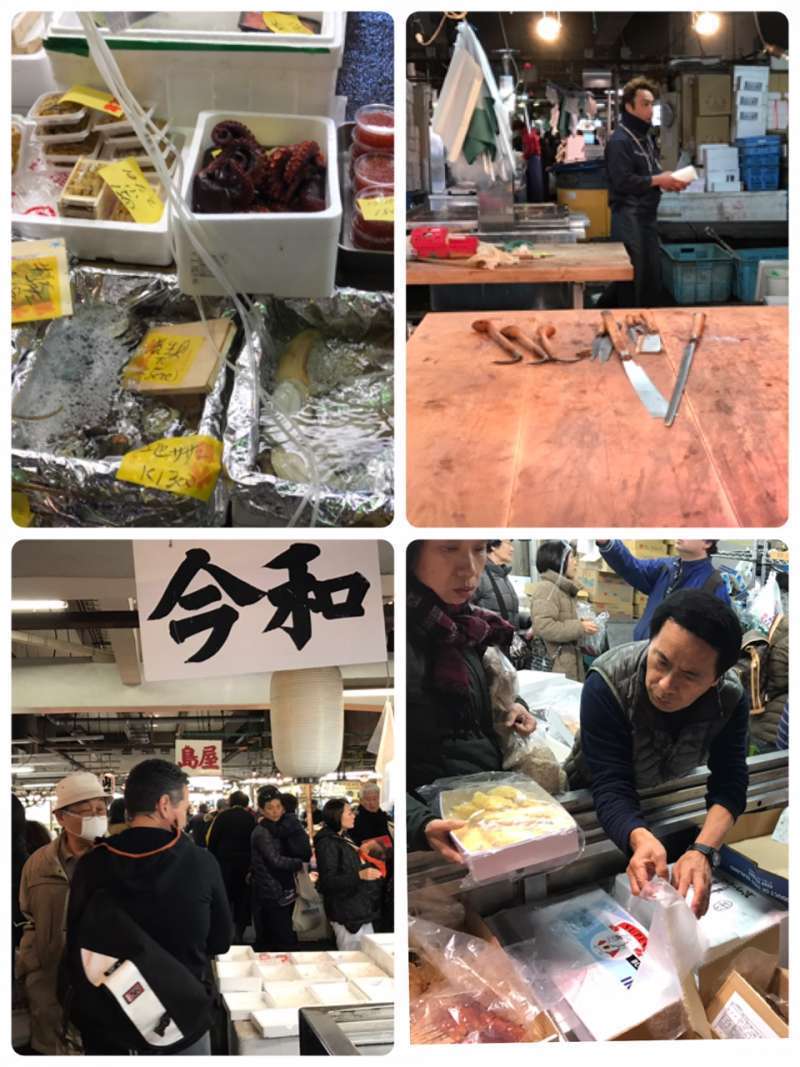 by MAYUMI
One day, my guest and I visited Kitasenju as our first destination of our tour. Kitasenjun is located in the northeast part of Tokyo and now...

Plan your trip to Tokyo with MAYUMI

“ Mayumi made our short Tokyo adventure well worth it! She is a superstar! ”

My family (4 adults) was tired and hardly had any sleep the night before due to a late flight arrival, but when we met Mayumi the following early morning at the Skytree Tower in Tokyo, Mayumi greeted us with her bright smile and warm hello, and there was a ray of sunshine she brought with her! I had planned a very specific packed 4-hour itinerary with Mayumi (we communicated in advance) that requ...
read more

“ When in Japan you need the best, call Mayumi ”

We booked Mayumi for our trip to Japan, starting in Tokyo. We booked a nine hour tour and were able to see all the sites. Very happy with Mayumi attention to details and how she mixed up old Japan with the modern Japan. She was even so kind to to help us cook Shabu Shabu for lunch. If you need a great guide, don’t look any further. Book Mayumi!
read more

“ Best of Tokyo with Mayumi! ”

We are grateful to have met Mayumi and to have spent a full day with her touring Tokyo. She is a warm and personable host, happy to share her knowledge with her clients and to maximize their enjoyment of the sites in Tokyo. Her special interests are the shrines and temples of Japan. There are many in Tokyo and these were special stops during our tour. We highly recommend Mayumi as a guide fo...
read more

Absolutely a great day. Mayumi was the perfect host. We are a family of four two boys 14 & 10 . We had a wonderful day we wanted to see as many aspects of Tokyo that we could fit in a day. From the very beginning she was very engaging and knowledgeable. We had a pace that was quick but also easy to maintain, just the way we wanted it allowing us to see so much. She answered all and any questi...
read more

Mayumi was friendly, punctual, helpful before and during our tour, knowledgeable and patient with our children, providing a flexible day to meet our expectations and interests. She was able to share historical and current information about Tokyo and discuss trends and interests of locals. It’s worth noting that we paid for her lunch and travel ie train fare of 1,000 yen - in hindsight it would be ...
read more

We had a fabulous day with Mayumi! She personalised our tour based on where we were staying and finished at a gluten free restaurant as my son has coeliacs disease. She is very knowledgeable and lots of fun plus great with kids. Mayumi is gold class and made our first day in Tokyo so memorable! Thanks Mayumi!!
read more

Mayumi was friendly, knowledgeable and well organised. We had an excellent time and enjoyed the day. Mayumi’s knowledge of history, culture and the places we visited was great. She was also patient and genuine. Thank you for a lovely day!
read more

Thank you so much Mayumi we had the most amazing 3 days. You organised everything for us when we arrived pasmo, exchanging jr passes, booking Shinkansen nothing was too much trouble. The days you planned were a perfect mix of keeping parents and 2 children very happy and engaged. So many hi-lights I wouldn’t know where to start however recommend everyone eat the tuna wow just wow! Thank yo...
read more

I enjoyed a wonderful day with Mayumi visiting multiple temples and shrines around Kamakura. Despite the detailed itinerary, nothing was rushed and the day proceeded at a leisurely pace. Mayumi is warm and engaging and has an illuminating knowledge of Japanese history and culture.
read more

MAYUMI is well suited to this line of work and has a fabulous personality and excellent English speaking skills. She showed us things we would have missed on our own, and even got our rail tickets for the remainder of our trip! I particularly enjoyed Ginza and the fish market, and wish we had more days in which we could explore Tokyo with Mayumi.
read more