We had a typical japanese breakfast at 7am at Kanazawaya Ryoukan. The meal was full of fish, rice and vegetables with tea. The owners are a very nice couple, very serviceable. After leaving the Ryoukan, we went directly to the Sado Fish Market.

Early in the morning, the boats arrive to the market with all they fished and sell them there from 7am until 9am more or less. Even when it is a fish market, the place looks so clean and barely smells! The boats have thir fishes in a net and with that they take it out from the boat to the baskets where the sellers picked from and organize inside the building in trays. The moment where they take out the fishes from the boat is the moment when also all the seagulls appear and try to steal the fishes. It is very impressive to see and also time to time scary when from nowhere one of them cross in front of you suddenly. 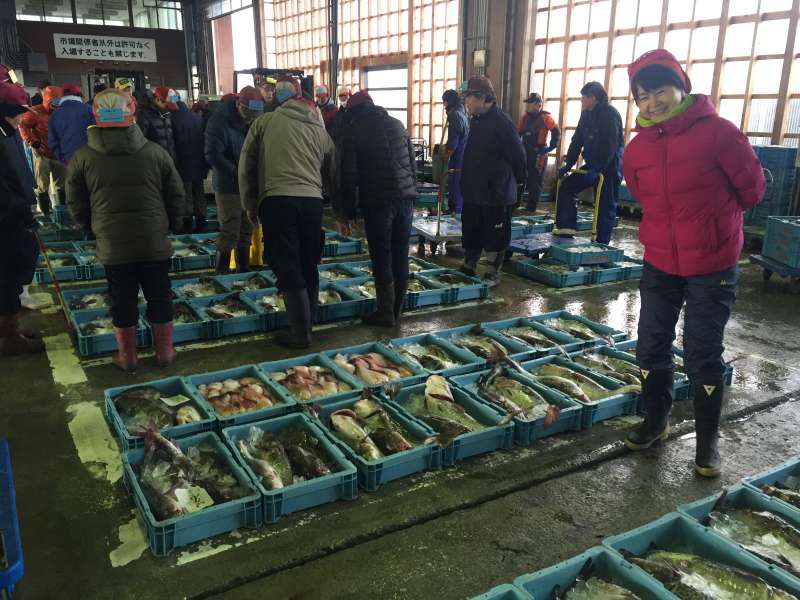 The next visit was the Seisui Temple. From more that 10 years, this temple has been abandoned, but there was a time where the location was very crowded. Many years ago, there was a silver mine which gather a lot of people who wanted to work. There were many houses and also a Castle that you were able to see from the temple. But when the mine stopped working, everything around it started to disappear. This also happened to the temple. This temple was constructed in the 15th year of the Kyoho era (1730 AC) and it wanted to imitate the style of the main temple in Kyoto. This temple belonged to the Shingoon sect of Buddhism. From the entrance is smashing the view with the long stairs that takes you to the main building. Very ancient and tall trees go along with the stairs which gives the feeling of entering into a different world. Once you are on the top, you can see and feel the years inside. The Temple conserves the structure but it is easy to guess that is abandoned since many years ago. Inside the main buildings the temple keeps more that a hundred Buddha statues locked. You can also see from the top the cemetery of the temple and in the other side, what it used to be the monks house. 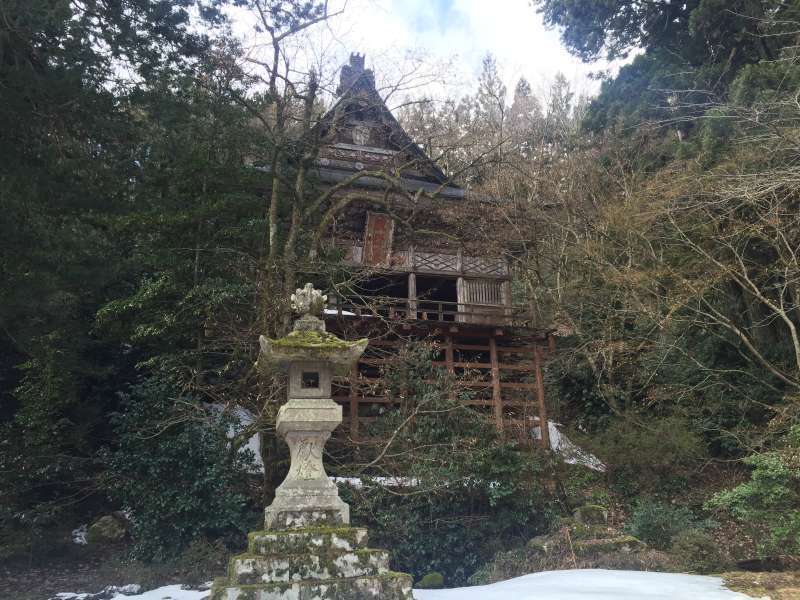 Our third visit was the Myosenji Temple. The particularity of this temple is the beautiful five-story pagoda it has once you enter. Also, there is a beautiful garden with its peaceful energy and the graveyard where famous figures from Sado Island, and also some exiled people, were buried there. You can visit also the Monk´s house with its 15.5 meters pillars! This temple was a nice place to go after having lunch because of its indescribable tranquility which makes you relax and be conected with yourself. 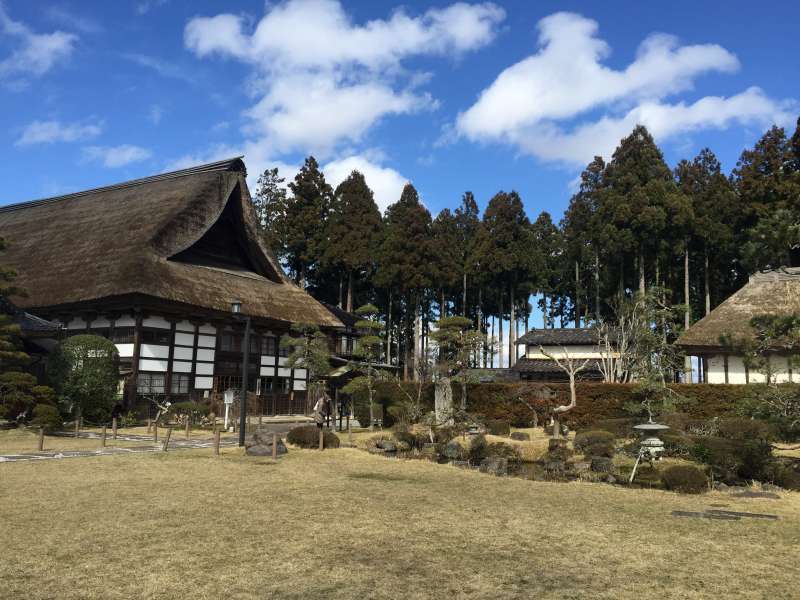 Our last visit was to Futatsu-game and Ono-game. Futatsu-game, also known as the Island of the two turtles. The name came from the shape of the two large rocks that you can see from the top of the mountain in direction to the sea that gives the impression of two turtles. It is a famous place in summer season where a lot of people go for swimming, camping, do barbecue and also enjoy the view that this place offers. Futatusu-gama has also a hotel and some cabins where you an stay. During winter you can also enjoy the sightseeing with the beautiful skies proper of the season. Ono-game also gain its name because of the turtle shape. The One-game is only one rock and you also have a beautiful view from one of the spots set for that. There is a path that guides you to that spot and also to a large torii gate. Futatsu-game and Ono-game were recognize with 2 Michelin stars in the Green Guide Japan. 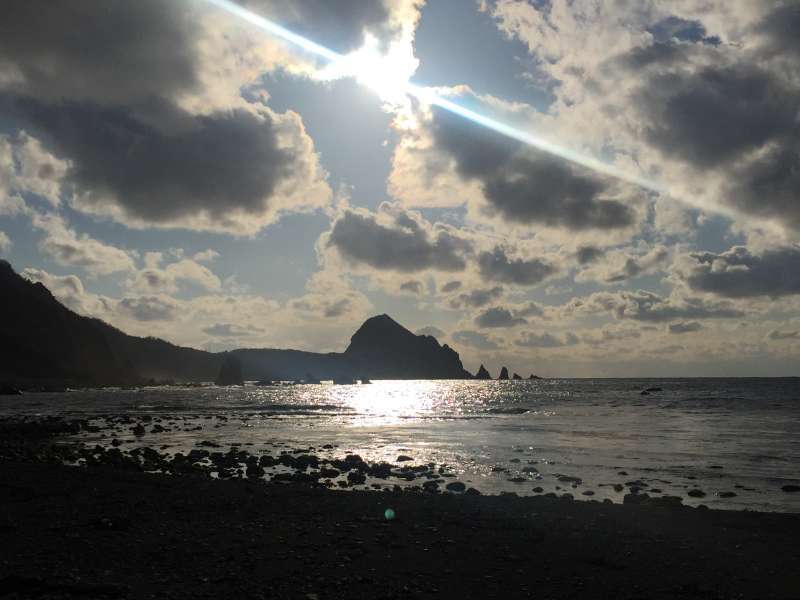 Here we are again at the end of the day. We came to another Ryoukan located in the north of the Island. The rooms are big and new, and the service also very good. We had dinner here in the hotel. I extensive variety of local fresh fishes cooked in different ways. So if you plan to try local food, the Ryoukan is a great place to do it!

Looking for an authentic travel experience in Kyoto but still stuck at home? No problem! Why don’t you start by taking a Virtual Tour for a moment’s escape from the mundane and chaos with our professional guides in Kyoto?

Plan your trip to Kyoto

Toshiyo was such a great guide! very communicative before the trip. 1/2 day in kyoto, 2 adults, & 2 kids (6 & 8). she gave us great information we would have missed if she wasn't with us. helped us with the Bus. kept my kids engaged. it was a great introduction to beautiful Kyoto! thank you for all your suggestions Toshiyo!
read more

Toshi is a great tour guide. She has a lot of energy and is very knowledgable. I enjoyed going to the temples/shrines with Toshi. She would come up with some surprising details that made the visit so much more enjoyable. I would highly recommend Toshiyo as a guide.
read more

Richard took us on a 3 hour virtual tour as we “walked with him” through places or worship, spiritual sites, the historical district and more. He was engaging, thoughtful, knowledgeable, and fun. His ability to enable us to experience Kyoto like we were there was wonderful. The cultural insights fabulous. He surpassed our expectations of a virtual tour by a huge margin.
read more

I had an amazing time in Kyoto with Kiriko! It was a difficult time to plan a tour because a lot of places were closed due to the coronavirus, but she put together a great itinerary of cool places that I hadn't seen yet during my time in Kyoto. She even found the one nighttime temple illumination that was still open! After the sightseeing was finished she took me to a great restaurant to try K...
read more

“ A trully unique view of Japan ”

Our day with Richard was so outstanding that we are already planning a return trip to Japan, but only if he tags along for the whole trip. His knowledge of history is very impressive, his musings about Budhism are enlightening and his easy conversation with the locals makes anyone feel welcome in the hidden spots that no ordinary tourist would be able to reach; his disposition for a full day o...
read more

Kaori is fantastic. We are a family of 2 adults, 2 kids from HI. Kids are 8 and 6. Kaori adjusted skillfully to everyone's wishes and we got to see, learn and taste so much. If we go back to this area, we will hire her again! Wonderful experience.
read more

My family and I had a wonderful day in Kyoto thanks to Yumiko. She was very knowledgeable, caring, charismatic, and fluent in english. We did our research, I let her know where we wanted to visit and she set up the most efficient route for us, saving us a lot of time. After the tour, she gave us a hand written list of places that she suggested to research and go if interested. I would recommend...
read more

Mana arrived early and was very flexible as we changed some plans because of the rain and closures. She provided us with a fascinating day and we saw a lot - Byodoin Temple, shrines, a textile centre, and she even helped us find a restaurant where one of our party could eat GF food. Her knowledge of Kyoto and environs, transport and culture is very good. Thank you Mana for a wonderful day! Helen a...
read more

Toshiyo was very knowledgeable of the Osaka area. With several places closed she was still able to provide a full day of visiting various sites.
read more

“ Do not hestitiate to book a prviate taxi tour with Hiroshi! ”

My partner and I booked a private tour with Hiroshi to see the following sites; Kinkaku-ji Temple, Ryoan-ji Temple, Tenryu-ji Temple, Bamboo forest of Arashiyama, Otagi Nenbutsu-ji Temple and Shimogamo-Jinja Shrine. I have only good things to say about Hiroshi and the tour. His knowledge and insight of the temples and shrines provided an extra dimension to what we saw that was invaluable. He w...
read more

Plan your trip to Kyoto